Back in the Game – Press Coverage, part 2

The local newspaper Reutlinger General-Anzeiger accompanies one of our teams through the MedTech Startup School. The journalist Ines Stöhr visits milestones of our current program and publishes a series of articles on the development of the team “Back in the Game“. In the second article she took a closer look at the project management of the team.

Tuebingen: “We are currently considering a name for our App” reveals Vivian Sönksen. “Moreover, we are also developing our own homepage right now.” Soenksen, the economy student, is part of a team of six working on a scientific cellphone game combating depression at the MedTech Startup school. During the past weeks, the team attended numerous workshops. One, for instance, dealt with the certification of medical products. A very demanding process which, as the developers got to know, will take up at least a year. However, the team also underwent training dealing with the best ways introducing their new product. “We have to get far more serious” says Soenksen.

Funding was also a topic covered over the course of the past weeks. Right now, the scientists are preparing to file documents to receive grants. “We are meeting three times per week.” says Soenksen. Already before the teambuilding training at a bootcamp the previous month, the team learned that there was a good chemistry between them. A management workshop dealt with the organization of the project. “Communication is key. Founding a company without an extensive exchange is doomed to fail.” says Marcus Jaegle (VS Consulting). “There is a lot to do if it comes to developing a product or founding a company.” assured the lecturer. Thus, organization is vital: Milestones must be set, work processes have to be defined, and an order set before they can be translated into a timetable. Managing a project means doing it all in order to have success. There are set criteria for such a process which one ought to put down on paper, Jaegle said. “That is much better than Excel.” These criteria contain the budget, communication, and daily checks of the products after a set schedule. “Without these criteria, one will get lost.” Knows the expert. “It is dangerous to get lost.” Seventy percent of all founders fail due to a lack of information. “People do not talk enough with one another. All team members need to have the same information.” 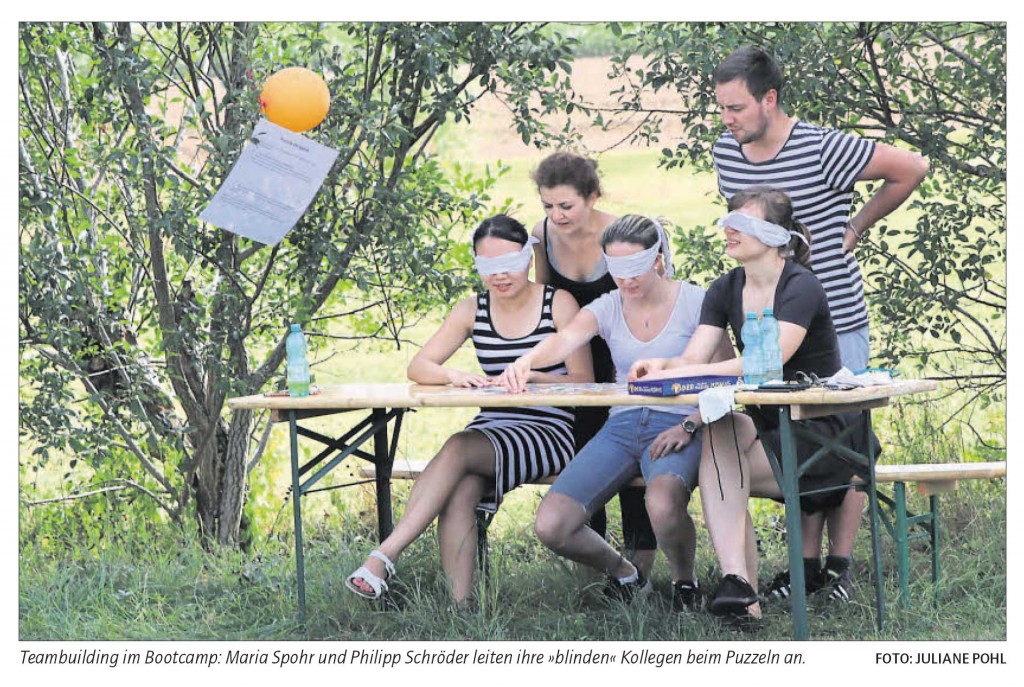 Demo-Version for the public

Startups have to change constantly, since means and results are two different things. Thus, a Startup has to adjust to the customers and the market during its development. “Jaegle offers his help in that area, as well. “Why are we doing what we are doing?” is one of the most important questions a young founder has to ask himself/herself every now and again. A clear aim must be set for every participant understanding it 100 %. “If only 90 % are worked out it’ll fail at some point.” says Jaegle convinced. The next steps set by the team surrounding Vivian Soenksen are: setting up a finance plan and collecting statistic data showing the advantages of the app. If the cellphone game could weaken the first symptoms of a depression than costs for healthcare insurers might be saved, which ought to be targeted as customers for the product, and, by doing so, providing the App free of charge to affected individuals. Farther steps are: setting up criteria for a certified case study; setting up a case study schedule; conducting interviews with people suffering from depression, support groups, and therapists. Afterwards, a version of the app ought to be tested on its effects. What kinds of games are needed for
the targeted group and during which stages of a depression can they be applied. At the end of the 100 days program at the MedTech Startup School, a business model as well as a demo-version of the game is required, knows Maria Spohr, responsible for public relations.

Find all articles on “Back in the Game“ in English on our webpage:

“The presentation needs to be more intriguing“, published on September 18th, 2018 in Reutlinger General-Anzeiger

“It will fail without communication“, published on September 5th, 2018 in Reutlinger General-Anzeiger

“I could have needed that too“, published on August 8th, 2018 in Reutlinger General-Anzeiger

Find all articles on “Back in the Game“ in German on the webpage of the Reutlinger General-Anzeiger:

This site uses cookies. By continuing to browse the site, you are agreeing to our use of cookies.OKNeinRead more
To change your privacy setting, e.g. granting or withdrawing consent, click here: Settings